Google+
About A Midsummer Night’s Dream

Among its many memorable lines, the warning, “the course of true love never did run smooth” never rang more true than with the amorous confusion in William Shakespeare’s “A Midsummer Night’s Dream.” The story depicts an unseen fairy world existing alongside, interacting with, and often manipulating the human one. When fairy royalty and mischievous minions interfere, reality is suspended and two sets of young lovers are caught up in magical and antic confusion. As is Shakespeare’s wont, all is resolved, the balance of love is restored and all live happily ever after. Believed to have been written in the 1590s, “A Midsummer Night’s Dream” is one of Shakespeare’s most popular and frequently produced plays. 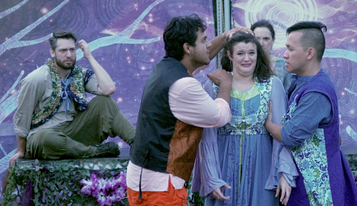 About OUR A Midsummer Night's Dream: The Lovers' Tale

The Lovers' Tale is an 80-minute version of Shakespeare's delightful comedy, focusing on the four lovers and the fairies Puck and Oberon, and runs without intermission. The script was edited by M.L. Cogar, Optimist Theatre’s Dramaturg, and co-direct along with Tom Reed, Optimist’s Associate Artistic Director. The show is being performed on a mobile set specifically designed for our unique touring show and feature an eight person cast.

Performance locations ranged all around the greater Milwaukee area and a bit beyond.

Cast: (Click to for more information about our cast) *Member of Actors' Equity Association 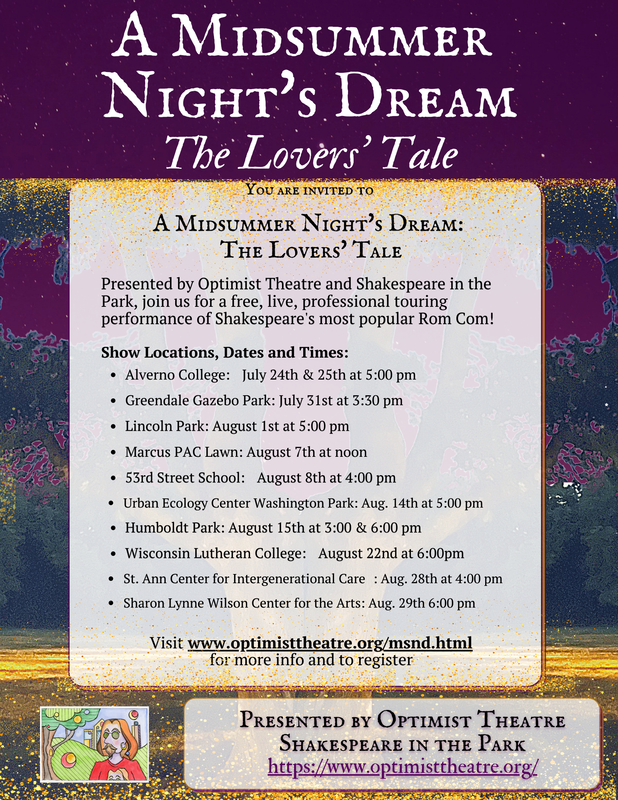 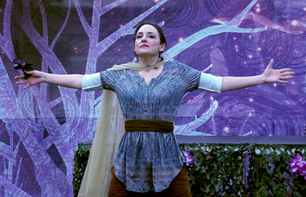 So glad that you are back and the show was as great as ever! --Molly
(Alverno Performance, July 24th)

"What a great performance today! Loved the energy, humor and action. This cast was clearly committed to the story and having fun too!" --Sue
(Alverno Performance, July 25th)

“Wonderful Mid Summers Night Dream this evening at Alverno College. You guys are great. I hope everyone in the area can see this”--Mark
(Alverno Performance, July 24th)

"Want to introduce my grandkids to Shakespeare on visits to Milwaukee. Most theater is too expensive for me to take them. This sounds like a wonderful opportunity." --Anonymous
(Donor Survey) 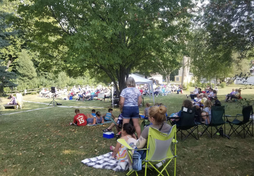 "Cast was talented and energetic. Really enjoyed the pacing of the show (smooth). The music added a great deal to the production. Excellent use of park - a perfect spot for this production. Costumes and set were cleverly constructed." --Anonymous
(Greendale Gazebo Park Performance, July 31)


"We enjoyed the superb performances and engagement of the actors. The sound, scenery, and costumes were well-suited to an outdoor venue. The ushering staff was very helpful. It felt safe and reasonably distanced. All-in-all, it was a great show!" --Melba
(Greendale Gazebo Park Performance, July 31) 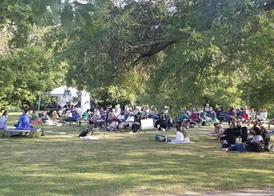 "I appreciate the variety of venues/neighborhoods and bringing the theater to the people." --Anonymous
(Greendale Gazebo Park Performance, July 31) 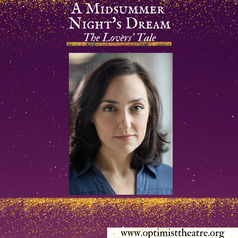 Libby Amato: Puck, Hippolyta
Libby is so happy to be returning to Optimist and live Shakespeare in the park!
Previous Optimist credits include NO HOLDS BARD: THE PERICLES PROJECT, COMEDY OF ERRORS, and KING LEAR.
Libby also recently appeared in Renaissance Theaterwork's BEST OF BR!NK BR!EFS.
Love you, Mom! 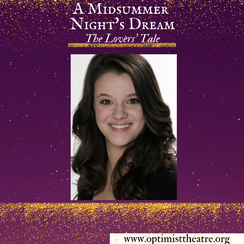 Susie Duecker : Helena
Susie Duecker is thrilled and honored to be a part of her first show with Optimist Theater!
She was most recently seen acting in Forward Theater Company's 2021 Monologue Festival. Other Wisconsin credits include The Twelve Dates of Christmas at Next Act Theatre, The Drowning Girls at Renaissance Theaterworks, Big Fish at First Stage, Windjammers and Muskie Love at Northern Sky Theater, etc.
Some of her favorite Shakespeare roles include Rosalind (As You Like It), Mistress Page (Merry Wives of Windsor), Marc Antony (Julius Caesar), Montjoy, Williams, and the French King (Henry V).
She sends her enthusiastic thanks to the folks at Optimist - this is a dream role in one of her all-time favorite shows ever! It’s a privilege to be working with such a brilliant team! 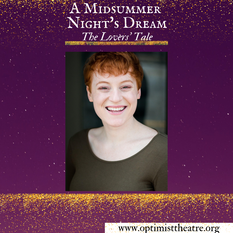 Rebekah Farr : Hermia, Fairy
Rebekah is excited to be working on her second show with Optimist! You may have seen her on stage before as Dromio of Syracusa in Comedy of Errors (Shakespeare in the Park), Iris in The Nether (The Constructivists), Portia in Merchant of Venice and Julius Caesar (Mad Rogues), and GraveDigger in Milwaukee Chamber Theatre’s Young Playwright Festival.
She would like to thank ML, Tom, Susan, and Ron for yet another great opportunity.
Love to her ever-supportive family and friends always. 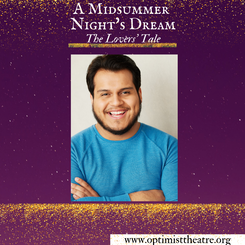 Fabian Guerrero: Lysander
Fabian Guerrero hails from Aurora, Illinois, and is a recent graduate of the University of Illinois
BFA acting program. He gives never ending thanks to his family and his dear friends for their support. 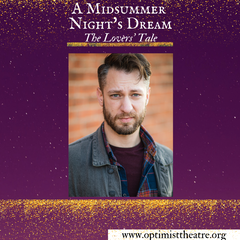 Seth Hale : Oberon, Theseus
Seth is a professional actor from Milwaukee with years of experience and degrees in theater and music. He's performed in film and on stage all over the country, and all over the world as a cruise ship performer. He's happy to be back on stage and invites you to stalk him on his website www.sethkhale.com 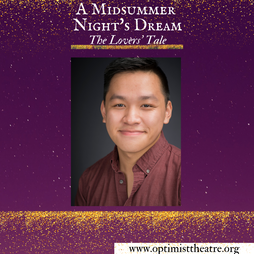 King Hang: Demetrius
Having just graduated from University of Wisconsin-Parkside, King is excited to perform in his first production with Optimist Theatre.
Past credits include The Year Without a Summer (The Captain) with Milwaukee Chamber Theatre, Midsummer Night's Dream (Cobweb) with Southwest Shakespeare in Arizona, Romeo and Juliet (Benvolio) and Urinetown (Bobby Strong) with UW-Parkside.
King hopes you all enjoy the show and the work of this amazing ensemble. 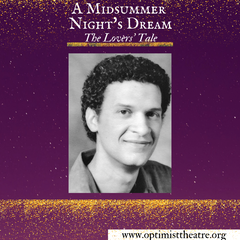 Michael Pettit: Egeus (Puppeteer)
Michael has a 25 year history in the Arts, working mainly in puppet design and construction, puppetry performance, conventional theater performance, stage technical work, and props-making. Michael is best known for his work in performances with Milwaukee Mask and Puppet Company, co-productions with Theatre X and First Stage, several seasons with Quasimondo Physical Theatre, and countless Summer Arts events with Milwaukee Public Theatre.
His last role was as a Puppeteer and Puppet Maker for a production of 'The Little Prince' at Waukesha Civic Theater. 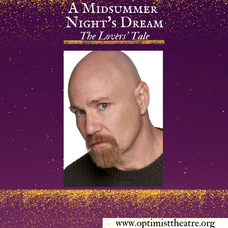 Egeus: Tom Reed* (Voice)
is one of the founding members of Free Shakespeare in the Park and current Associate Artistic Director of Optimist Theatre. His appearances include Caliban in The Tempest; Feste in Twelfth Night; the title role in Macbeth; Leontes in The Winter’s Tale; Puck in A Midsummer Night’s Dream; and Thaliard, Pandar and Gower in the Pericles, Prince of Tyre.
Tom directed or co-directed As You Like It, Julius Caesar, and Much Ado About Nothing and was the vocal coach for The Comedy of Errors.
In his other lives, Tom is the manager of Team Certified Sports, a professional boxing organization, and the Chair of Creative and Performing Arts at Alverno College
*Member of Actors' Equity Association